One broker is living and breathing Diana Ross’s 1970 hit, as her own career climb in insurance has mirrored a trek she recently completed to Machu Picchu – with a two-year-old in tow, no less.

“I love to travel – that’s one of my passions. If I have some free time, I’m always thinking about my next move and where I’m going to go,” said Vanessa Ruiz (pictured), senior commercial underwriter and broker at Risk Placement Services (RPS) in the greater New York City area. “In my life, I prioritize, I plan, and I execute, and that’s what I did with [this] trip.”

Reaching the high altitudes of Machu Picchu started with a flight to Lima, and then another flight to Cusco, which was once the capital of the Inca Empire. A few trains and buses later, and Ruiz, as well as her husband, parents, local guide, and two-year-old son, were at the trail’s starting point.

As if the four-and-a-half-hour hike to Machu Picchu wasn’t enough, Ruiz also wanted to represent RPS, so she asked her boss if she could bring an RPS flag to the ruins of the ancient city for a great photo op, and to show that RPS employees do more than insurance. She fashioned a banner out of a tote bag with the RPS logo (see below), and the rest is history. 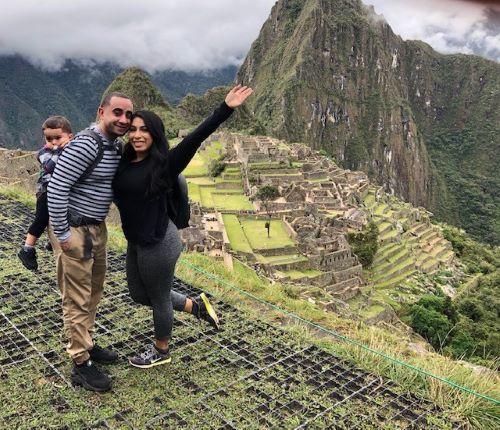 One look at Ruiz’s insurance career, and it’s clear that the broker knows how to make her way to the top of any summit. She started off working on the administrative side of insurance for a small retail agency when she was in high school, and she eventually spent five years there, learning about home and auto insurance.

“As I got my degree in business management and administration, I thought I could move into something else [outside of insurance], but then I got the opportunity to move to a mid-sized agency doing personal lines, so I took it,” said Ruiz. “I was there for about two and a half years, and, after that, I felt like I was stagnant and I wasn’t sure what I wanted to do [next].”

It turns out that the next jump would land Ruiz a gig at Burns & Wilcox, and while she didn’t have the experience in commercial lines that the role required, she convinced the company to give her a chance.

“I told them upfront, I don’t have experience in commercial, but what I can tell you is that I work hard,” she told Insurance Business. She was hired on to assist the largest producer at the agency, and, two years on, Ruiz got the opportunity to learn the underwriting ropes before working on her own as a producer and underwriter, where she had to build her own relationships with retail agents from the ground up. When that producer (and her mentor) retired, she was ready to take over his book.

Finally, in 2018, Ruiz was hired at RPS, and began the next chapter of her journey in insurance.

“RPS was actually always my biggest competitor,” said Ruiz. “I would lose accounts to RPS, so when the opportunity came and I was approached [by the company], I was also ready to move on from where I was, so it was perfect timing. If I can’t beat them, I’m going to join them, so I joined them.”

Commercial lines has become Ruiz’s bread and butter, as has helping retail agents find solutions for their risks. In fact, she is today one of the leading writers of new business in the office, and her relationships include some of the largest retailers in the territory – some of which are so strong that Ruiz will work out of her top agent’s office once a month, becoming the go-to wholesaler in those shops.

“I like to be on my toes and commercial lines definitely does that – you never get one single risk that’s going to be the same and, every day, you’re seeing something different, whether it’s a line of business or a type of exposure,” she said. “I really love being able to place the harder risks that these agents can’t place with their admitted markets.”

However, being a young woman and new face in the industry was at times challenging. Ruiz explained that she had a lot of doors closed in her face, but she never gave up.

“I just kept on going, and kept on trying to make appointments until I was finally given the chance, and when I was given the chance, that was my time to prove myself – prove my service, prove the way that I work, and just let them know that I’m not going to let them down,” said Ruiz, who is also a member of the PIA Young Insurance Professionals (YIP), where she gets a chance to network with other professionals and learn even more about insurance.

“My advice for someone who’s coming into this industry is to learn as much as you can,” she said. “It doesn’t matter if you’ve been here for 40 years – you never stop learning.”